You are here: Home / Archives for Homepage Items

On March 13, 2018, a three judge panel of the Fifth Circuit Court of Appeals issued a ruling that struck down the lower court’s block on SB4. Because of this, most of SB4 can now go into effect. 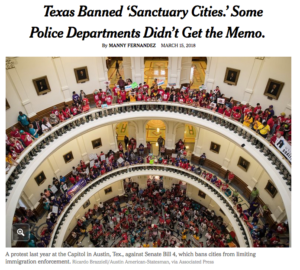 The New York Times reports on cities and local governments in Texas responding, or not, to the implementation of SB4:

But months after portions of the law went into effect in September, prompting legal battles and fierce debates about whether it could lead to widespread racial profiling, officers in some Texas cities appear to be asking about immigration status only in very rare cases. And even after the court’s ruling this week, officials in those cities are not planning to make them change.

“From an operational standpoint, from a policy standpoint, it will have no impact,” Chief Art Acevedo of the Houston Police Department said of the law. “The problem is the perception problem that it creates, that local police officers are going to be more interested in immigration enforcement of people who don’t bother anybody.”

Going forward, the case against SB4 is still being pursued, but this ruling may have unintended effects.

Despite upholding most of the law’s provisions, the Fifth Circuit’s decision could narrow the effect of the law. The ruling suggested that local officials who limit their cooperation with federal immigration enforcement because of limited resources were not necessarily violating the law.

“It is not 100 percent obvious what is allowed and not allowed as far as policymaking,” said Thomas A. Saenz, the president and general counsel of the Mexican American Legal Defense and Educational Fund, which represents San Antonio and other jurisdictions and groups in the lawsuit. “You don’t know how it’s going to be put into effect in the field.”

The following Q&A is taken from the one-pager produced by MALDEF. You can find printable copies of the one-pager in both English and Spanish at the bottom of the page.

What did the Fifth Circuit Court decide?

On March 13, 2018, the U.S. Court of Appeals for the Fifth Circuit issued its ruling on whether SB4 should be allowed to take effect while the lawsuit moves through court. Most of SB4 is in effect today. The Fifth Circuit decision allows most of SB4 to remain in effect, but keeps part of SB4 blocked. In addition, the Fifth Circuit stated several important limitations on SB4.

What is the status of SB4 after the Fifth Circuit decision?

Where are we in this case?

Texas Senate Bill 4, the so-called “sanctuary cities” bill signed into law by Gov. Greg Abbott and scheduled to take effect on Sept. 1, 2017, was blocked, in large part, by a federal court order in late August. The United States Court of Appeals for the Fifth Circuit heard oral argument on the preliminary injunction in the case on Nov. 7. The court upheld SB 4, with one exception, in an opinion issued on March 13. Here is a list of significant dates, along with links to legal documents and statements:

Nov. 15, 2016: One week to the day after the election of Donald J. Trump as president, Texas State Sen. Charles Perry (R-District 28) pre-files Texas Senate Bill 4, which calls for civil and monetary fines against local governments and colleges that refuse to cooperate with federal immigration officials on enforcement.

Feb. 8, 2017: The Republican-controlled Texas State Senate approves SB 4 in a strict party-line vote. A day later, the bill is sent to the Texas House.

April 27: After 16 hours of contentious debate, the Texas House passes SB 4 at 3 a.m. in a 94-54 vote and sends it to Gov. Greg Abbott. Read MALDEF’s statement reacting to the vote.

May 7: Governor Abbott signs SB 4 into law, effective Sept. 1, during a Sunday evening Facebook Live appearance at 6:35 p.m. No news media or other officials are present. In a statement, MALDEF president and general counsel Thomas A. Saenz describes SB 4 as “Abbott’s Folly.”

May 8: The League of United Latin American Citizens (LULAC), Maverick County and the border city of El Cenizo file a lawsuit against the State of Texas to challenge SB 4.

May 8: Texas Attorney General Ken Paxton files a preemptive lawsuit against MALDEF, the City of Austin, and Travis County asking a federal court to declare SB 4 constitutional. MALDEF is named in the complaint for stating its opposition to SB 4 and pledging to fight it in court. Read MALDEF’s statement in response.

June 1: MALDEF, representing the City of San Antonio, the Texas Association of Chicanos in Higher Education (TACHE), the Workers Defense Project, and La Union Del Pueblo Entero (LUPE), files a lawsuit against the State of Texas alleging that SB 4 violates the First, Fourth and Fourteenth Amendments of the U.S. Constitution, as well other constitutional and statutory provisions. Other Texas jurisdictions, including Bexar County and the City of El Paso, join the MALDEF lawsuit in subsequent weeks. Read the lawsuit and the legal summary.

June 16: After MALDEF threatens to seek court sanctions against the State, Texas drops MALDEF as a defendant from its lawsuit filed on May 8, but continues with its complaint against the City of Austin and Travis County. Read the notice of dismissal and MALDEF’s statement.

June 20: MALDEF files a motion in federal court seeking a preliminary injunction to block SB 4 from taking effect on Sept. 1, arguing that SB 4 would inflict grievous and irreparable harm on individuals and public officials and should be barred from implementation until the law’s legality is determined. Read the motion and declarations, and listen to a MALDEF press briefing held in advance of the hearing.
Plaintiffs in other cases have also filed motions for preliminary injunction.

June 26: Chief U.S. District Judge Orlando L. Garcia of the San Antonio Division of the U.S. District Court for the Western District of Texas holds a hearing on the motion for a preliminary injunction to stop SB 4 from taking effect on Sept. 1. MALDEF presents oral argument, as well as the testimony of Bexar County Judge Nelson Wolff and San Antonio City Councilman Rey Saldaña.

June 29: U.S. District Judge Sam Sparks of the Austin Division convenes a hearing in the lawsuit filed May 8 by Texas against Travis County and the City of Austin. MALDEF argues that the SB 4 cases should be heard in San Antonio, and that there is no basis for a lawsuit by the State of Texas.

Aug. 10: Judge Sparks dismisses the May 8 lawsuit by Texas. The “decision leaves the constitutionality of the enacted SB 4 to be determined by the proper federal court in San Antonio,” MALDEF president and general counsel Thomas A. Saenz says in a statement.

Sept. 12: MALDEF responds to Texas’ request for an emergency hearing before the U.S. Court of Appeals for the 5th Circuit asking the court to consider blocking parts of Judge Garcia’s preliminary injunction.

Sept. 22: MALDEF presents oral argument to the United States Court of Appeals for the Fifth Circuit in opposition to an emergency order requested by the State of Texas that would allow SB 4 to take effect.

Sept. 25: A panel of three judges from the United States Court of Appeals for the Fifth Circuit issues a ruling largely denying a motion by Texas to allow portions of SB 4 to take effect, but permitting limited implementation of two of the law’s provisions that had previously been blocked. The ruling is temporary, pending a resolution of the full appeal, which is scheduled for argument on Nov. 7 before another Fifth Circuit panel.

Nov. 7: The United States Court of Appeals for the Fifth Circuit will consider the merits of a preliminary injunction issued in late August by U.S. District Judge Orlando that temporarily blocked implementation of key provisions of SB 4. The three-judge panel will decide whether to affirm the injunction until the resolution of the entire case. The panel will also review cross appeals that challenge parts of the law that Judge Garcia allowed to go into effect.

March 13, 2018: The Fifth Circuit rules that “with one exception, SB4’s provisions do not, on their face, violate the Constitution” and allows the law to remain in effect. The exception, which was struck down for violating the First Amendment, was the law’s “endorsement provision,” which called for penaltiesincluding fines, imprisonment and removal from office of elected officials who “endorse” policies that limit immigration enforcement.

Please find attached a quick summary of the preliminary injunction in the SB4 case.  Judge Garcia enjoined some portions of SB4 and will allow other portions to go into effect. 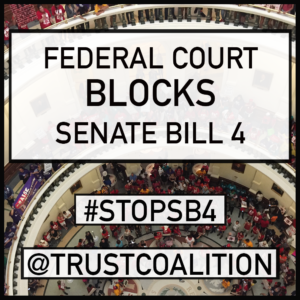 “By enjoining the bulk of SB 4, the federal court has preserved the ability of elected officials, sheriffs, and police chiefs to prevent their police forces from becoming untrained and unrestrained enforcers of federal immigration law. While the court did not stop police officers from asking about immigration during a lawful detention, officers would be wise to avoid such inquiries because they could trigger a successful challenge to the detention itself, potentially jeopardizing legitimate work by local police.”

See the Fact Sheet prepared by MALDEF (in English & Spanish) below for detailed information about the SB4 Ruling.

Less than a month after being signed into law, Texas Cities — along with affected community groups and organizations — filed lawsuits against Gov. Greg Abbott and the State of Texas to stop SB4 from going into effect on September 1, 2017. Plaintiffs, including cities from across Texas as well as community and academic organizations, filed lawsuits arguing that SB4 violated the 1st, 4th and 14th amendments of the U.S. Constitution, among other violations of the law. The TRUST Coalition applauds all of those standing up for justice by opposing SB4 in the courts and looks forward to seeing this unconstitutional law stricken from the books. 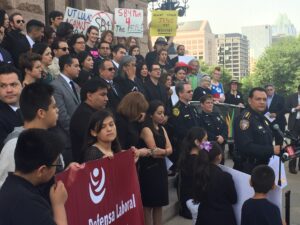 You can find all of the lawsuits filed to date here:

Here are some key news articles to stay updated on the efforts to block SB4 from going into effect: